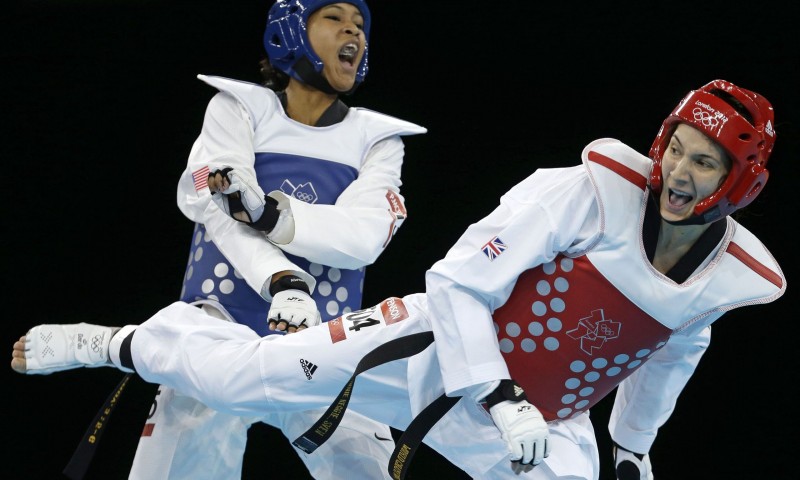 Taekwondo is an empty-hand combat form that entails the use of the whole body. Tae means "to Kick" or "Smash with the feet," Kwon implies "punching" or "destroying with the hand or fist," and Do means "way" or "method." Taekwondo thus, is the technique of unarmed combat for self defense that involves the skillful application of techniques that include punching, jumping kicks, blocks, dodges, parrying actions with hands and feet. It is more than a mere physical fighting skill, representing as it does a way of thinking and a pattern of life requiring strict discipline. It is a system of training both the mind and the body in which great emphasis is placed on the development of the trainee's moral character.

A martial art that in "todays" form of self defense has evolved by combining many different styles of martial arts that existed in Korea over the last 2,000 years and some martial arts styles from countries that surround Korea. Taekwondo incorporates the abrupt linear movements of Karate and the flowing, circular patterns of Kung-fu with native kicking techniques. Over fifty typically Chinese circular hand movements can be identified in modern Taekwondo. A few of the earlier martial arts styles that contributed to Taekwondo are: T'ang-su, Taek Kyon, also known as Subak, Tae Kwon, Kwonpup and Tae Kwonpup. There are also influences from Judo, Karate, and Kung-fu.

"The earliest records of Taekwondo practice date back to about 50 B.C. During this time, Korea was divided into three kingdoms: Silla, which was founded on the Kyongju plain in 57 B.C.; Koguryo, founded in the Yalu River Valley in 37 B.C.; and Paekche, founded in the southwestern area of the Korean peninsula in 18 B.C.." Tae Kyon ( also called Subak) is considered the earliest known form of Taekwondo. Paintings from this time period have been found on the ceiling of the Muyong-chong, a royal tomb from the Koguryo dynasty. The paintings show unarmed people using techniques that are very similar to the ones used by Taekwondo today.

A taekwondo student typically wears a uniform (dobok), often white but sometimes black (or other colours), with a belt tied around the waist. There are at least three major styles of do-bok, with the most obvious differences being in the style of jacket: (1) the cross-over front jacket that resembles traditional Asian clothing, (2) the V-neck jacket (no cross-over) typically worn by WTF practitioners, and (3) the vertical-closing front jacket (no cross-over) typically worn by ITF practitioners. The belt colour and any insignia thereon indicate the student's rank. In general, the darker the colour, the higher the rank. The school or place where instruction is given is called the do-jang . The grandmaster of the do-jang is called a gwan-jang-nim ; Master (senior instructor or head of do-jang) is called sa-beom-nim ; Instructor is called gyo-san-nim; Assistant Instructor is called jo-gyo-nim.Taekwondo, along with many other martial arts, is traditionally performed in bare feet, though there are specialist training shoes that can sometimes be worn.

Taekwondo is known for its emphasis on high kicking and fast hand techniques, which distinguishes it from martial arts such as karate or southern styles of kung fu. However, the World Taekwondo Federation (WTF) believe that the leg is the longest and strongest limb a martial artist has, and kicks thus have the greatest potential to execute powerful strikes without successful retaliation.Taekwondo as a martial art is popular with people of both genders and of many ages. Physically, taekwondo develops strength, speed, balance, flexibility, and stamina. An example of the union of mental and physical discipline is the breaking of wooden boards, bricks or tiles, which requires both physical mastery of the technique and the concentration to focus one's power.